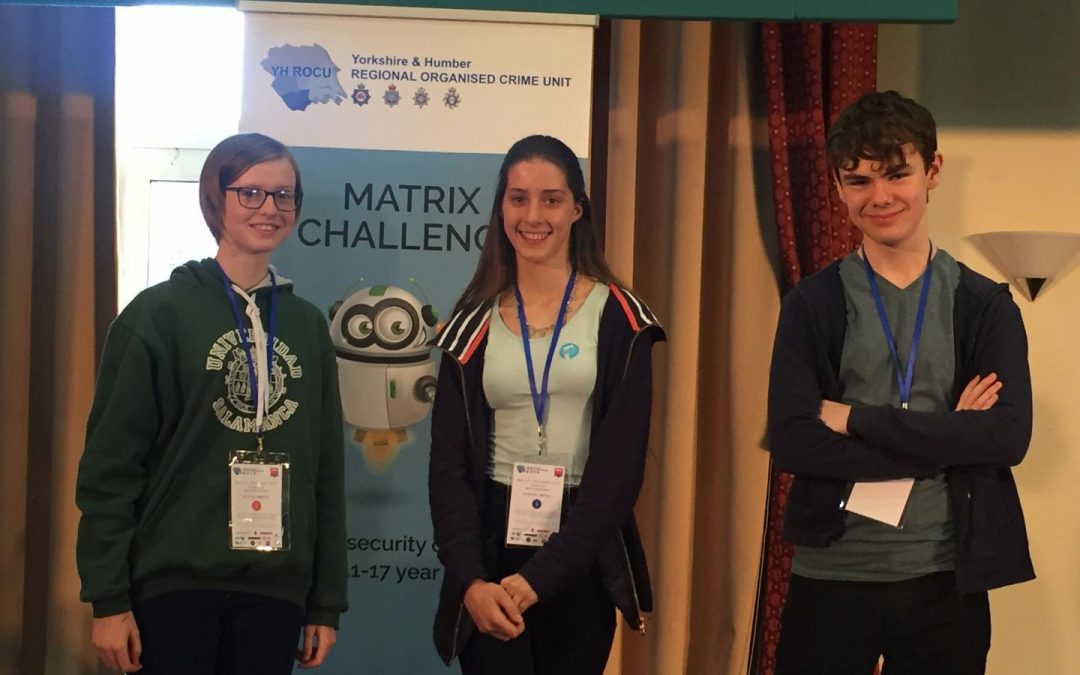 A report from our students Caitlin, Isaac and Scarlett who went to this year’s final in July.

The Matrix Challenge was a cyber-security challenge ran by Yorkshire and Humber Regional Cyber Crime Unit, that our school entered to compete in. 10,000 people entered in total, and then a live final was announced for the top 60, which included us. The challenge was then split into two age categories: 11-14 and 15-17, and we fit into the former. It was based at York Racecourse, and we took part in 6 challenges to decide a top 3 for each and a special award for trying especially hard. Caitlin was awarded 3rd place in the age category 11 – 14 out of the 4000 students, and was also the only girl to place in the entire challenge.

On the day, we were given an introduction to what was happening, and then we were split into groups of ten. In these groups, we went around different cyber-security based challenges, including:

Near the end of the day, there was also a drone demonstration and a few talks from some hosts.

During the day, we received numerous talks on cyber-security, and our potential futures in the field. One of these talks was by Kerensa Jennings, CEO of the iDEA. She covered a few inspirational stories, mainly revolving around the theme of how everybody is part of something big. Another talk that was given was by a member of the American Federal Bureau of Intelligence. He gave the audience an interactive quiz on the roles of the FBI and other cyber-security issues. He also taught us about various levels of hacking, from “Hacktivism,” to hacking for military purposes. Separate talks were also provided throughout the day to entertain the parents/teachers.

In conclusion, a fun time was had by all, including Miss Turner, who travelled on 2 trains and a bus to cheer us on, and gave up her day, which was very much appreciated, and helped with our confidence. It was an exciting and positive experience, that taught us a lot about cyber-security and helped us begin to forge a CV and future careers.